These are the kind of words that spring to mind when one looks at the Mercedes G63 AMG – it’s old-fashioned looks (largely unchanged from its 1979 guise) are a bit of a mismatch with the sporty AMG and edgy rims. One quick look at the G63 and it’s easy to see why it’s the preferred status symbol for so many of the royalty and rich – the front fascia, peppered with single LED strips, screams “get out of my way!” and the towering ground clearance ensures you feel like you’re sitting on a throne. 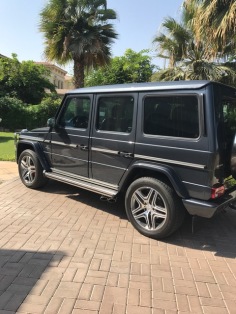 The looks don’t excite me as much, however, it feels like the G63 is still stuck in 1979 like that heavily-Botoxed middle-aged man who refuses to age gracefully. Mercedes needs to look at the styling of the 911 for inspiration which has aged gracefully but still feels relevant and modern amongst the current crop of supercars. The interior feels much more modern than with bits and pieces plucked from different models such as the A-Class and even the SLS. The Designo diamond-stitched leather seats that my model came with are also a gorgeous addition and provide great support as you thrash the car around corners or take it off-road (which you probably never will). It also reminds me much less of a 90s-era S-class, unlike its predecessors, but is nowhere near the quality and feel of the stunning 5-star interiors of the new C, E or S-class.

This particular model also comes with 3 driving modes: Comfort, Sport and Eco (the latter of which you will never really use) which helps give the car multiple personalities. The SLS-sourced gear – although an AMG standard – feels awkward and flimsy to use, a proper gearstick is necessary in a car of this massive size.

As for the driving modes, under Comfort, throttle response is swift but not neck-breaking – with the exhaust noise providing a teaser of what’s really in store – and you get the classic, smooth Mercedes drive, albeit it feels a bit contorted since you feel like you’re on stilts the whole time. The car really comes into its own in Sport mode, with the 6.3 Biturbo V8 producing a melodious exhaust tone and straight-line speed being blisteringly fast, just as good as any supercar out there. But the disappointment kicks in once you throw the car into a corner, as the car’s high centre of gravity always makes you feel like it can topple over any minute.

The Range Rover Sport Supercharged is miles ahead of the G63 in every aspect but it can’t beat its German rival in one aspect – sheer road presence. So the G63 doesn’t really belong on the track or off-road, but it will be right at home on Sheikh Zayed Road when you want people to get your of the way.

There was an error retrieving images from Instagram. An attempt will be remade in a few minutes.